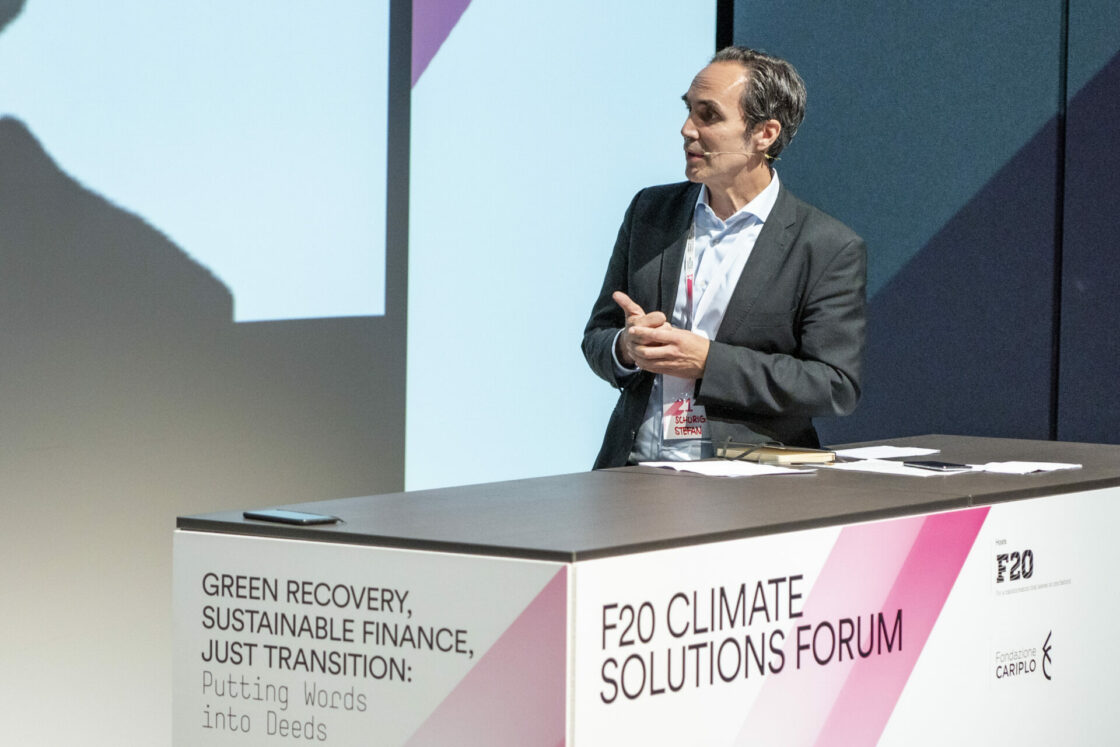 Climate Crisis and the G20: Putting words into deeds

Good: the G20 this year recognised the fact that exceeding 2°C global temperature increase can be much worse than staying below 1.5°C as affirmed in the “Global Warming of 1.5° C” IPCC Special Report”. Also good: the G20 countries, therefore, decided to accelerate action to keep this 1.5° C limit ‘within reach’ during the critical decade of the 2020s. But what now? This was the question raised at this year’s F20 Climate Solutions Forum as we really need to put ‘words into deeds’!

Below are some of my personal reflections on the event.

“We have to immediately end new investments into the burning of coal, oil and gas, accelerate the deployment of renewable energy, protect and restore world natural ecosystems instead – forests, mangroves, rivers, oceans, and wildlife. These are the building blocks to resilience and sustainability.“

The Forum started with a clear analysis: the Earth’s system is moving outside the range of stability due to human activity. We have to immediately end new investments into the burning of coal, oil and gas, accelerate the deployment of renewable energy, protect and restore world natural ecosystems instead – forests, mangroves, rivers, oceans, and wildlife. These are the building blocks to resilience and sustainability. And they will be the basis for future finance and for local, national as well as multilateral decision making such as by the G20. Those who are delaying climate protection are in many cases actually acting against the law and we need to challenge that by helping to enforce existing law. Foundations have a pivotal role to play in this transformation by taking a stand and by taking action themselves. These statements, made by Johan Rockström, Director of the Potsdam Institute for Climate Impact Research or by the environmental lawyer, Roda Verheyen were very powerful. The idea of calling upon the ‘G3’ among the ‘G20’- US, China, and the European Union – to take the lead on climate seemed an interesting approach given the most recent pledges coming from these countries suggest a move away from coal.

“Foundations have a pivotal role to play in this transformation by taking a stand and by taking action themselves.”

Other keynote speakers also exhibited a new sense of urgency that was somehow new to me. As stated by Ban Ki-moon, former UN Secretary-General and Deputy Chair of The Elders in his F20 contribution, “through global, coordinated, and concerted action the G20 must now not only deliver on their promises but lead boldly with new commitments in line with 1.5 degrees. Heads of State have an exceptional opportunity and obligation to do what is needed so the world can avert climate disaster and it is imperative that the G20 pull in the same direction on this critical effort.”  I was extremely pleased about these clear words of Ban Ki-moon as they get to the heart of what F20 is advocating for: treating the global climate crisis as a crisis and urging the G20 countries to live up to their responsibility to align their actions with the Paris Climate Agreement and the Sustainable Development Goals of the United Nations.

Climate Change, Environmental Activism, and Disability
I want to see an inclusive society in which foundations play a strong role
Global Trends and Strategic Time Horizons in Philanthropy 2021 Survey
Send this to a friend
Questo sito utilizza i cookie: Leggi di più.