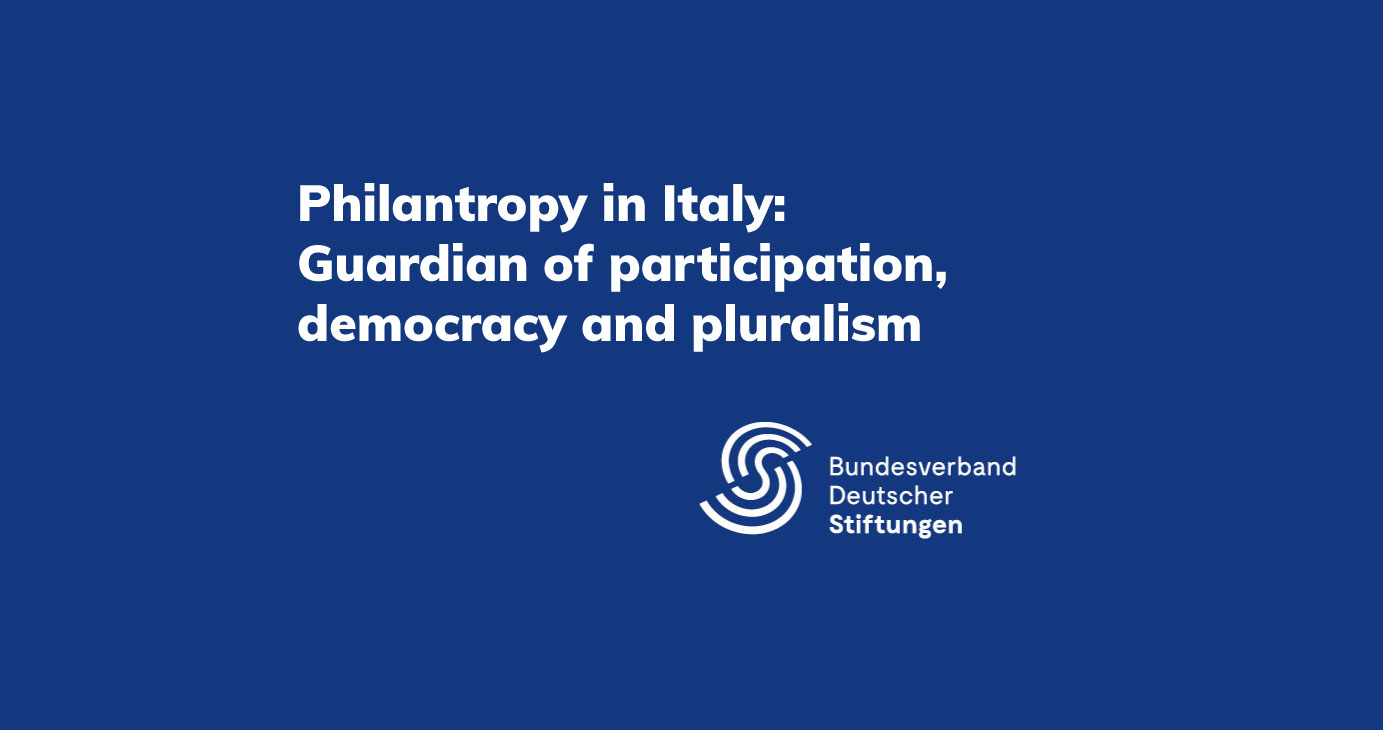 Interview with Stefania Mancini, member of the Foundation Council of the Fondazione Charlemagne, Rome/Italy and Vice-President of Assifero

What are the three broad issues that will drive Italy’s foundation and philanthropy sector in the next 10 years? Which topics do you expect philanthropy to focus on?

The country is experiencing a dramatic crisis, from an institutional point of view, in terms of democratic participation, economic trends and the value system. Key issues are therefore democracy, participation, and the next generation. These words imply a broad variety of critical elements, where the voice of the non-profit sector and civil society lacks strength.

The scenario sees foundations and philanthropy as among the few players that can provide a tangible contribution in terms of strategic initiatives that may be a bridge to a better future. The topics may be different, but it will be of fundamental importance for philanthropy to focus strategically and systematically, not individually, in order to invigorate the impact of its activities for the common good.

What is traditional philanthropy in Italy, and how do you expect this to develop in the future?

Italy has always been characterised by a culture of giving, and then recently it saw the emergence of new players. These new players stimulated a much-needed new approach; they have become “healthy” competitors of the traditional philanthropy. Hopefully, the future will see them acting together. I do not see any advantage in the standardisation of philanthropy.

While on the one hand we need and have to work for a common EU space, a European status for foundations, on the other I think that at country level traditions and philanthropic heritage should survive and be the vital source for a country. The development of Italy’s philanthropic sector will depend on its capability to optimise its own governance and welcome a more efficient and transparent one; to embrace cooperation with domestic and international actors, promoting reciprocity; to trust that acting together is better than being lonely souls.

What role will philanthropy take?

Philanthropy will be the guardian of participation, democracy, and pluralism.

Will Italy’s philanthropy be more nationally focused, or will it also be regional and global? Is there any other subject which you consider as vital for the sector?

Regardless of the negative socioeconomic situation (which started years ago), Italy’s philanthropy focuses on national issues mostly and I think that in the coming years we are unlikely to see a change in this trend. There will be four vital subjects: partnering communities, to interact through the conjunction of systemic leadership serving the development of regions; the new law for the Third Sector, entering into force in 2020; international partnerships, to learn best practices and to nourish a fruitful exchange; and the umbrella associations’ role.

Are there some developments we are not yet aware of at an international level, but which you see coming along in the future?

I see two main developments coming along in the future that are interconnected:

At EU level: we might expect EU trends to influence and play a growing role in the sector, also following the EESC’s opinion on philanthropy and the new coalitions within the European Parliament. The achieved strength and effectiveness of EU philanthropy networks will be vital to the sector.

At the international level, the ongoing humanitarian crisis and the shrinking spaces for democracy will demand that foundations and European philanthropy as a whole, become more strategic and play that specific role that competes to them: that of being defenders of human rights, that of looking at the future with a long term approach; that of guaranteeing the autonomy and the independence of the civil society.

If people want to get information about news and trends in the sector in Italy, where can they find this information?

There is no global and exhaustive portal or website where one can get a real picture on news and trends in the sector. The newsletters and the magazines of the main umbrella organisations provide some information, together with some online magazines that are attentive observers of the sector:

However, they are not always available in English.